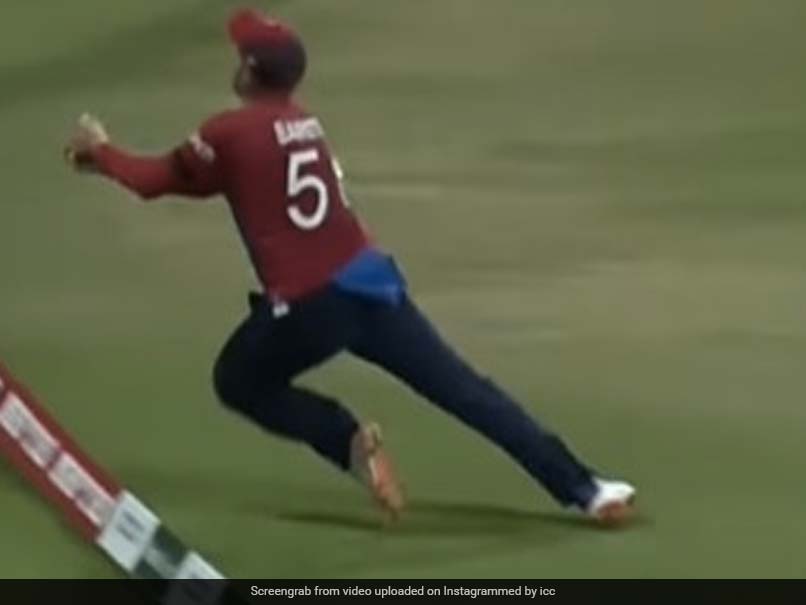 New Zealand defeated England by five wickets to reach their maiden T20 World Cup final on Wednesday in Abu Dhabi. In what was a closely-contested semi-final clash, the Blackcaps had to rely on the power-hitting skills of Daryl Mitchell and Jimmy Neesham to stage a comeback while chasing a target of 167 runs. Things could have been different for Eoin Morgan’s side in the 17th over of New Zealand’s chase but poor luck near the boundary ropes gave their opponents a lifeline at a time when England seemed to be in control. Ahead of the 17th over, New Zealand were at 110 for four and needed 57 runs from 24 balls. It looked like a commanding position for England. Morgan sent Chris Jordan to bowl the 17th over.

In the first delivery of the over, Neesham smashed Jordan for a six and then followed it with a four in the third ball. In the fourth ball, after a wide, Neesham received a slower delivery. The all-rounder hacked high towards the leg side but a rushing Jonny Bairstow dived to try and catch the ball. Bairstow, however, fell on the boundary ropes before passing it to Liam Livingstone to try and complete the attempt.

The catch sent England into a state of meltdown with players already celebrating. However, replays showed that Bairstow’s knee had hit the rope before he could pass the ball to his teammate.
The tournament’s official handle posted a video of the incident on social media. “ALMOST AGAIN,” wrote the handle. “Is this six the catalyst for the New Zealand comeback?!”

Before Neesham’s arrival, New Zealand looked like they were heading towards defeat. But the 31-year-old smashed 27 runs off 11 balls to accelerate his side’s chase before being dismissed in the last delivery of the 18th over.

Neesham’s departure didn’t spoil New Zealand’s chase as he had already put them in a strong position to wrap up proceedings. In the next over, Mitchell hammered three boundaries to win the game for New Zealand. Mitchell remained unbeaten after registering 72 off 47 balls.

Initially, England posted 166 for four in 20 overs with Moeen Ali smashing an unbeaten knock of 51 off 37 balls.

Chasing a target of 167, New Zealand reached 167 for five in 19 overs and will face either Pakistan or Australia in the final.