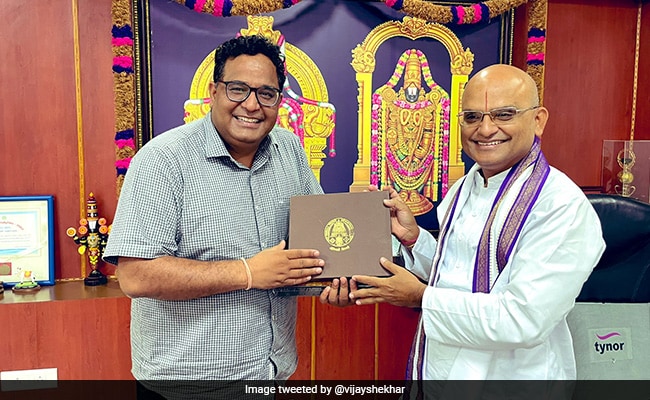 The Paytm IPO opened for subscription on Monday and will close on Wednesday.

Paytm founder and Chief Executive Officer (CEO) Vijay Shekhar Sharma visited the Tirupati temple in Andhra Pradesh to seek blessings ahead of the company’s Initial Public Offering (IPO) today. The IPO of Paytm, earlier known as One97 Communications, is India’s biggest-ever initial public offering. The digital payments platform is looking to raise nearly $2.5 billion (roughly Rs. 18,527 crores), in what has already been a record year for share listings. Food delivery giant Zomato was the country’s biggest IPO of the year until now with its $1.3 billion (roughly Rs. 9,634 crores) share issue in July.

Paytm is backed by Chinese tycoon Jack Ma’s Ant Group, Japan’s SoftBank, and Warren Buffett’s Berkshire Hathaway, which together own around a third of the company.

“Just met Sh. Jawahar Reddy Executive Officer, Tirumala Tirupati Devasthanams (#TTD) in Tirupati as I have come here to seek blessing of God for all of @Paytm family,” Mr Sharma tweeted along with a picture of him with the temple trust’s executive officer.

Just met Sh. Jawahar Reddy Executive Officer, Tirumala Tirupati Devasthanams (#TTD) in Tirupati as I have come here to seek blessing of God for all of @Paytm family. ???????????????????????? pic.twitter.com/i7RIep8sLk

The trust oversees the operations and finances of temples including the Tirumala Venkateswara Temple in Andhra Pradesh, the second richest and most visited religious center in the world.

The Paytm IPO opened for subscription on Monday, November 8, and will close on Wednesday, November 10. Interested investors can bid in the lot of six equity shares and multiples. At the upper price band, investors will have to pay Rs 12,900 to get a single lot. The price band has been fixed at Rs 2,080 to Rs 2,150 per equity.

Paytm is going to utilise the returns from the IPO for various activities like “acquisition of consumers and merchants and providing them with greater access to technology and financial services”.

It will also invest in new business ventures, partnerships, and acquisitions, while the remaining funds will be used for other corporate activities.

The platform was launched in 2010 and quickly became synonymous with digital payments in a country traditionally dominated by cash transactions.

It has benefited from the government’s efforts to curb the use of cash – including the demonetisation of nearly all banknotes in circulation five years ago – and most recently, from Covid.

Paytm has reported negative cash flows for the last three years, primarily due to operational losses.